The Eulogist: A Novel (Hardcover) 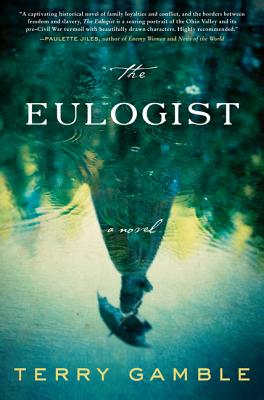 From the author of The Water Dancers and Good Family, an exquisitely crafted novel, set in Ohio in the decades leading to the Civil War, that illuminates the immigrant experience, the injustice of slavery, and the debts human beings owe to one another, witnessed through the endeavors of one Irish-American family.

Cheated out of their family estate in Northern Ireland after the Napoleonic Wars, the Givens family arrives in America in 1819. But in coming to this new land, they have lost nearly everything. Making their way west they settle in Cincinnati, a burgeoning town on the banks of the mighty Ohio River whose rise, like the Givenses’ own, will be fashioned by the colliding forces of Jacksonian populism, religious evangelism, industrial capitalism, and the struggle for emancipation.

After losing their mother in childbirth and their father to a riverboat headed for New Orleans, James, Olivia, and Erasmus Givens must fend for themselves. Ambitious James eventually marries into a prosperous family, builds a successful business, and rises in Cincinnati society. Taken by the spirit and wanderlust, Erasmus becomes an itinerant preacher, finding passion and heartbreak as he seeks God. Independent-minded Olivia, seemingly destined for spinsterhood, enters into a surprising partnership and marriage with Silas Orpheus, a local doctor who spurns social mores.

When her husband suddenly dies from an infection, Olivia travels to his family home in Kentucky, where she meets his estranged brother and encounters the horrors of slavery firsthand. After abetting the escape of one slave, Olivia is forced to confront the status of a young woman named Tilly, another slave owned by Olivia’s brother-in-law. When her attempt to help Tilly ends in disaster, Olivia tracks down Erasmus, who has begun smuggling runaways across the river—the borderline between freedom and slavery.

As the years pass, this family of immigrants initially indifferent to slavery will actively work for its end—performing courageous, often dangerous, occasionally foolhardy acts of moral rectitude that will reverberate through their lives for generations to come.

Terry Gamble is a Phi Beta Kappa graduate of the University of Michigan. She lives in Sonoma and San Francisco, California.

“In the Givens siblings, Terry Gamble has created a vivid and fierce-souled trio who navigate some of the strongest crosscurrents of American history. This is an inventive, spirited, and captivating story.”

— Jessica Shattuck, New York Times bestselling author of The Women in the Castle

“A captivating historical novel of family loyalties and conflict, and the borders between freedom and slavery, The Eulogist is a searing portrait of the Ohio Valley and its pre-Civil War turmoil with beautifully drawn characters. Highly recommended.”

— Paulette Jiles, author of Enemy Women and News of the World

“This gripping historical novel follows an Irish-American immigrant family as they search for their place in the free border state of Ohio, and the momentous choices they must each make in the face of the insidious reach of slavery. An essential read.”
— Lalita Tademy, New York Times bestselling author of Cane River, Red River, and Citizens Creek

“This is history at its liveliest pace, its most surprising turns, and its strangest twists in the narrow borderlands between antebellum north and south. The Eulogist challenges us to engage with both the living and the dead, the loved and the betrayed, the captive and the free.”
— Linda Spalding, award-winning author of A Reckoning

“With more twists and turns than the Ohio River, The Eulogist brings us to the source of our nation’s spirit, introducing us to characters we won’t forget, no matter whether we loathe them or love them, culminating on a pitch-perfect note: forgiveness.”

— Sally Cabot Gunning, author of The Widow’s War and Monticello: A Daughter and Her Father

This feature require that you enable JavaScript in your browser.
END_OF_DOCUMENT_TOKEN_TO_BE_REPLACED

This feature require that you enable JavaScript in your browser.
END_OF_DOCUMENT_TOKEN_TO_BE_REPLACED

This feature require that you enable JavaScript in your browser.
END_OF_DOCUMENT_TOKEN_TO_BE_REPLACED

This feature require that you enable JavaScript in your browser.
END_OF_DOCUMENT_TOKEN_TO_BE_REPLACED