Talking to the Sky: A Memoir (Paperback) 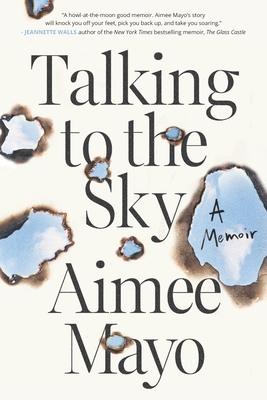 Recommended by the NEW YORK TIMES BESTSELLING AUTHORS OF -- The Glass Castle, Hillbilly Elegy, and Running with Scissors "Aimee Mayo's story will knock you off your feet, pick you back up, and take you soaring." -JEANETTE WALLS -- world wide best selling author of THE GLASS CASTLE

"I read the book in a day, because I couldn't put it down. It is gritty and hilarious, dark and triumphant. It has to be a movie." -- DENNIS QUAID award winning actor

"I was laughing so hard I had to get up and leave Starbucks." -- MB Roberts PARADE "It's as good as HILLBILLY ELEGY." -DANA PERINO, bestselling author and host of THE FIVE "I encourage everyone to read this book." -TIM MCGRAW country singer and actor "From out of left field comes this emotional powerhouse that must not be missed." -AUGUSTEN BURROUGHS, author of the bestselling memoir and movie RUNNING WITH SCISSORS "Wow. I feel bad about getting married: ) after reading this. It reads like a movie." -RICK SPRINGFIELD, singer and actor

"I've been reading all my life and never read a book that made me feel like this. I did not want it to end. This book is going to help so many people." -- TRICIA DESPRES People.com

"I devoured this book in 12 hours. I read hundreds of books each year and it has been years since I read one that impacted me so deeply and fundamentally. JAMEY JOHNSON country music singer

TALKING TO THE SKY is a tragic and triumphantly hilarious story of growing up in chaos and believing in faith over fear. It will make you want to go after your dreams even when everything is going against you. Aimee Mayo grew up in deep Alabama, rocked by the blow of a drunk man's fist before she made it out of the womb. Her colorful and charismatic father went from a gambling janitor to a multi-millionaire, but died homeless. Her mother was wonderful when she wasn't popping pain pills like M&M's and her stepdad made a weird science out of psychological abuse. Throughout her teens, Aimee survived by writing compulsively in diaries, dreaming of becoming a songwriter and finding her soulmate. After accidentally burning down her house- just one in a series of disasters- at twenty years old she found herself lost with no path to the life she had always longed for. She tried to kill herself and almost succeeded. Finally, Aimee made it to Nashville. She started out a waitress, got married to a wife-beating country singer, but never lost sight of her dream of becoming a hit songwriter and finding her soulmate. Aimee Mayo's songs have sold over 155 million units worldwide and have spent 26 weeks at #1 on the Billboard charts. She is one of the few females to receive both BMI's Country Song of the Year and Songwriter of the Year, putting her in the rare company of Loretta Lynn, Dolly Parton and Taylor Swift. She lives in Nashville with her husband Chris and their children Levi, Oscar, Lola and Truman, along with their dogs Girlfriend and Batman.

This feature require that you enable JavaScript in your browser.
END_OF_DOCUMENT_TOKEN_TO_BE_REPLACED

This feature require that you enable JavaScript in your browser.
END_OF_DOCUMENT_TOKEN_TO_BE_REPLACED

This feature require that you enable JavaScript in your browser.
END_OF_DOCUMENT_TOKEN_TO_BE_REPLACED

This feature require that you enable JavaScript in your browser.
END_OF_DOCUMENT_TOKEN_TO_BE_REPLACED