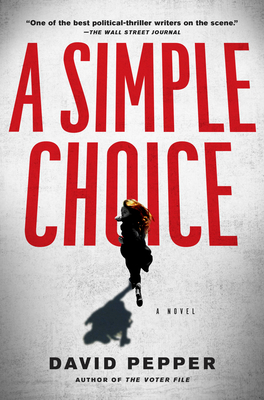 A propulsive political thriller featuring two outsiders caught up in a stunning conspiracy, filled with details and twists that only a true political insider could write.

When one of the nation’s most prestigious senators jumps from a cliff in Maine, it is no surprise that the political elite and the media flock to the story, determined to uncover what has happened--and whether foul play was involved. Palmer Knight, a fast-rising TV news correspondent, is sent to cover the mysterious death, and finds himself embroiled in a plot that goes far beyond the Senate and onto the global stage.

Meanwhile, Army veteran and former Supreme Court clerk Amity Jones thought she had left the fast lane behind when she moved to Ohio to care for her cancer-stricken mother. But her dogged pursuit of a local medical mystery places bring her back to the world of politics, and ultimately into Palmer's investigation of the senator’s death. The unlikely duo, brought together by seemingly unconnected events, soon find themselves enmeshed in a political conspiracy that reaches the highest levels of power, and places their lives—and many others—in terrible danger.

David Pepper is the author of The Voter File, The People's House, and The Wingman, all of which feature Jack Sharpe. He earned his B.A. from Yale University and his J.D. from Yale Law School. He has clerked for a judge on the United States Court of Appeals, served in local elected office in Ohio, worked for major law firms, and taught election and voting rights law. Prior to law school, Pepper worked in St. Petersburg, Russia, for the Washington-based Center for Strategic and International Studies. In 2015, he was unanimously elected Chairman of the Democratic Party of Ohio.

“David Pepper has written another thriller ripped from the headlines.”
—Hillary Rodham Clinton

“With A Simple Choice, David Pepper uses his insider knowledge of American politics to deliver a riveting, ripped-from-the-headlines thriller about two regular people up against extraordinary odds. This is a page-turner with a provocative idea at its heart.”
—Stacey Abrams, author of While Justice Sleeps

“Pepper…knows how to cast a chill with deep state politics.”
—Kirkus Reviews

“Eerily realistic…The author challenges preconceived notions about a horrible, multifaceted disease and combines this with car chases and behind-the-scenes political skullduggery, making the choice to read A Simple Choice a simple one.”
—Shelf Awareness

“Pepper certainly knows how to write a political page-turner….This ability to make the reader truly consider important ethical dilemmas is no small part of Mr. Pepper’s talent as a storyteller.”
—Criminal Element

“The fast-moving plot of A Simple Choice will keep readers turning the pages.”
—The Florida Times-Union

"As gripping as it is on point."
—Providence Journal

This feature require that you enable JavaScript in your browser.
END_OF_DOCUMENT_TOKEN_TO_BE_REPLACED

This feature require that you enable JavaScript in your browser.
END_OF_DOCUMENT_TOKEN_TO_BE_REPLACED

This feature require that you enable JavaScript in your browser.
END_OF_DOCUMENT_TOKEN_TO_BE_REPLACED

This feature require that you enable JavaScript in your browser.
END_OF_DOCUMENT_TOKEN_TO_BE_REPLACED