Death on Ocean Boulevard: Inside the Coronado Mansion Case (Paperback) 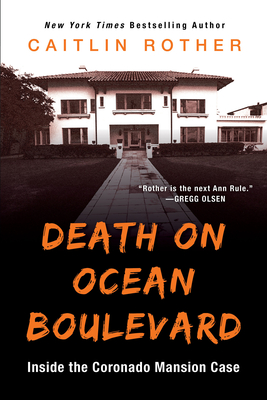 Award-winning investigative journalist and bestselling author Caitlin Rother explores the mysterious death of 32-year-old Rebecca Zahau, who was found hanging from a second-story balcony of her multimillionaire boyfriend's San Diego mansion in 2011. She was naked and gagged, with her ankles tied and hands bound behind her. On the door to her bedroom, investigators found a hand-written message: "SHE SAVED HIM CAN YOU SAVE HER." The death was deemed a suicide, but Rother reveals there's more to the story...

"I got a girl, hung herself in the guest house."

The call came on the morning of July 13, 2011, from the historic Spreckels Mansion, a lavish beachfront property in Coronado, California, owned by pharmaceutical tycoon and multimillionaire Jonah Shacknai. When authorities arrived, they found the naked body of Jonah's girlfriend, Rebecca Zahau, gagged, her ankles tied and her wrists bound behind her. Jonah's brother, Adam, claimed to have found Rebecca hanging by a rope from the second-floor balcony. On a bedroom door in black paint were the cryptic words: SHE SAVED HIM CAN YOU SAVE HER.

Was this scrawled message a suicide note or a killer's taunt? Rebecca's death came two days after Jonah's six-year-old son, Max, took a devastating fall while in Rebecca's care. Authorities deemed Rebecca's death a suicide resulting from her guilt. But who would stage either a suicide or a murder in such a bizarre, elaborate way?

Award-winning investigative journalist Caitlin Rother weaves stunning new details into a personal yet objective examination of the sensational case. She explores its many layers--including the civil suit in which a jury found Adam Shacknai responsible for Rebecca's death, and the San Diego County Sheriff's Department bombshell decision to reconfirm its original findings. As compelling as it is troubling, this controversial real-life mystery is a classic American tragedy that evokes the same haunting fascination as the JonBenet Ramsey and O.J. Simpson cases.

Caitlin Rother is a New York Times bestselling true crime author and Pulitzer Prize-nominated journalist. She worked for nearly two decades as an investigative reporter and has had work published in Cosmopolitan, The Los Angeles Times, The San Diego Union-Tribune, The Chicago Tribune, The Washington Post, and The Boston Globe, among others. As a TV crime commentator, she has done more than 200 media appearances on episodes of 20/20, People Magazine Investigates, Crime Watch Daily, Australia's World News, Nancy Grace, Snapped, and numerous shows on Netflix, Investigation Discovery, HLN, REELZ, Oxygen, E!, A&E, C‑SPAN and various PBS affiliates. Rother also works as a writing/research coach and consultant, and plays piano and sings in an acoustic band. She lives in Southern California and can be found online at CaitlinRother.com.

Praise for DEATH ON OCEAN BOULEVARD

“In Death on Ocean Boulevard, Caitlin Rother skillfully chronicles one of the most fascinating and controversial cases of the past decade. Big money, sex and a questionable death make for an addictive read.”
—Kathryn Casey, bestselling author of In Plain Sight

“The Rebecca Zahau case is one of the great crime mysteries of modern times. It took an author of Caitlin Rother’s caliber to bring it into sharp focus. A riveting read.”
—Gregg Olsen, #1 New York Times bestselling author

“Rother’s meticulous journalism shines through in this authoritative account of the Rebecca Zahau death incident. It’s difficult to know what to think of this kaleidoscopic case, but Rother provides the multiple perspectives and theories in a balanced manner, along with some significant surprises. If you think you know this case, think again. And read this book.”
—Katherine Ramsland, professor of forensic psychology and author of The Psychology of Death Investigations

"Was it suicide or was it murder? Investigative journalist extraordinaire Caitlin Rother masterfully examines the controversial death of Rebeca Zahau in Death on Ocean Boulevard. What truths does she uncover? Riveting!"
—Dan Zupansky, host of the "True Murder" podcast

"This book is a deep dive into the muddy waters of a fascinating case. Caitlin Rother is methodical and brilliant in her reporting!"
—Martha Steele, host of the "3 Book Girls" podcast

"A close look at a killer…Lost Girls by veteran journalist and true-crime writer Caitlin Rother is a deeply reported, dispassionately written attempt to determine what created a monster and predator. It is a cautionary tale and a horror story, done superbly by a writer who knows how to burrow into a complex case without becoming captive to her sources."
—The Los Angeles Times

"A true crime triumph for Caitlin Rother… It's a grim and bloody tale, one that directs our attention to the often-shocking complexities of the human animal and the sordid depths to which he may descend. Rother, who was nominated for a Pulitzer Prize during her tenure at the U-T, tells it well, thereby solidifying her star status in the field of true crime."
—The San Diego Union-Tribune on Dead Reckoning

"We've finally found the next Ann Rule! Caitlin Rother writes with heart and suspense. Dead Reckoning is a chilling read by a writer at the top of her game."
—Gregg Olsen, author of A Twisted Faith

"Riveting... a story that will haunt you... Rother presents a fascinating study of one woman's evil and greed—that ultimately leads to the murder of a kind-hearted millionaire. The compassion the author shows for the victim and the victim's family makes this book an emotional and gripping tale from beginning to end."
—Aphrodite Jones, New York Times bestselling author, on Then No One Can Have Her

“Rother’s meticulous journalism shines through in this authoritative account of the Rebecca Zahau death incident. It’s difficult to know what to think of this kaleidoscopic case, but Rother provides the multiple perspectives and theories in a balanced manner, along with some significant surprises. If you think you know this case, think again. And read this book.”
—Katherine Ramsland, professor of forensic psychology and author of The Psychology of Death Investigations

“Caitlin Rother again blows the lid off a headline-making case that shook an upscale California community. Moments will astound and disturb you. All true-crime buffs should be drawn to this first-class reporting and stay until the last page is turned.”
—Ron Franscell, USA Today bestselling author

“A suspicious headline-making death proves to be only the beginning as Rother unlocks the door of this real-life mansion of horrors to reveal a shocking true story of money, power, duplicity and scandal.”
—Michael Fleeman, New York Times bestselling author

“Using her innermost understanding of suicide, Caitlin Rother connects you with the heart-wrenching details of the Coronado Mansion Case. Prepare to be deeply immersed in this beautifully written, impeccably researched book right up to the gripping epilogue. The new facts never before exposed about this case will shock you! DEATH ON OCEAN BOULEVARD is a must-read for any true crime fan!”
—Alan R. Warren, author and host of “House of Mystery” podcast

This feature require that you enable JavaScript in your browser.
END_OF_DOCUMENT_TOKEN_TO_BE_REPLACED

This feature require that you enable JavaScript in your browser.
END_OF_DOCUMENT_TOKEN_TO_BE_REPLACED

This feature require that you enable JavaScript in your browser.
END_OF_DOCUMENT_TOKEN_TO_BE_REPLACED

This feature require that you enable JavaScript in your browser.
END_OF_DOCUMENT_TOKEN_TO_BE_REPLACED