The Making of Asian America: A History (Hardcover) 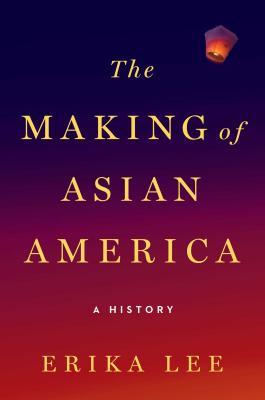 The definitive history of Asian Americans by one of the nation’s preeminent scholars on the subject.

In the past fifty years, Asian Americans have helped change the face of America and are now the fastest growing group in the United States. But as award-winning historian Erika Lee reminds us, Asian Americans also have deep roots in the country. The Making of Asian America tells the little-known history of Asian Americans and their role in American life, from the arrival of the first Asians in the Americas to the present-day.

An epic history of global journeys and new beginnings, this book shows how generations of Asian immigrants and their American-born descendants have made and remade Asian American life in the United States: sailors who came on the first trans-Pacific ships in the 1500s; indentured “coolies” who worked alongside African slaves in the Caribbean; and Chinese, Japanese, Filipino, Korean, and South Asian immigrants who were recruited to work in the United States only to face massive racial discrimination, Asian exclusion laws, and for Japanese Americans, incarceration during World War II. Over the past fifty years, a new Asian America has emerged out of community activism and the arrival of new immigrants and refugees. No longer a “despised minority,” Asian Americans are now held up as America’s “model minorities” in ways that reveal the complicated role that race still plays in the United States.

Published to commemorate the fiftieth anniversary of the passage of the United States’ Immigration and Nationality Act of 1965 that has remade our “nation of immigrants,” this is a new and definitive history of Asian Americans. But more than that, it is a new way of understanding America itself, its complicated histories of race and immigration, and its place in the world today.

Erika Lee is the granddaughter of Chinese immigrants who entered the United States through both Angel Island and Ellis Island. She grew up in the San Francisco Bay Area and received her PhD from the University of California at Berkeley. She teaches history at the University of Minnesota, where she is also the Rudolph J. Vecoli Chair in Immigration History and Director of the Immigration History Research Center. She is the author of The Making of Asian America, Angel Island (with Judy Yung), and At America’s Gates.


"Sweeping . . . Lee's comprehensive history traces the experiences of myriad Asian-American communities, from Chinese laborers in 1850s California to Hmong refugees in 1980s Minnesota. . . . The Making of Asian America shares strong similarities with other broad inclusive Asian-American histories, most obviously Ronald Takaki's Strangers From a Different Shore, first published in 1989. Lee's book doesn't radically depart from its predecessors so much as provide a useful and important upgrade by broadening the scope and, at times, deepening the investigations. . . . Fascinating. . . . I suspect Erika Lee will soon join [the canon of key Asian-American histories]."
— Oliver Wang

"In this fascinating retelling of the American creation story, Lee uses incisive scholarship, a wide historic lens and rich detail to fill in the long missing Asian-American pieces. Starting with ancient Greece and the Age of Exploration, from enslavement to modern day challenges, Lee tracks the epic Asian-American journey to North and South Americas, East Indies to West Indies, and in doing so, she breaks new ground and inverts the master narrative."
— Helen Zia, author of Asian American Dreams: The Emergence of an American People

"The Making of Asian America is a path-breaking approach to Asian American history. Professor Lee will challenge and surprise most of her readers. . . . She is clearly now a distinct and important voice in a debate of growing complexity."
— Roger Daniels, author of Coming to America and Charles Phelps Taft Professor Emeritus of History, University of Cincinnati

"A stunning achievement, The Making of Asian America establishes the centrality of Asians to American history, and poses alternatives to US national and immigration histories. Asians, this remarkable text reveals, transformed the face of America, and they locate the US firmly within a hemispheric and global order."
— Gary Y. Okihiro, Professor of International and Public Affairs, Columbia University

"Building on the best and newest scholarship, Erika Lee has written a sweeping yet personal and critical history of Asian Americans across centuries, continents, and diverse cultures without losing sight of the global, racial, and historical contexts of Asian migration, exclusion, and resettlement. A definitive and ideal text for college classes and the general public, The Making of Asian America is truly an enjoyable, informative, and insightful read."
— Judy Yung, Professor Emerita of American Studies, UC Santa Cruz, and author of Unbound Feet

“A fascinating narrative. . . . Deftly weaving together a masterful synthesis of the existing literature with new information culled from hitherto untapped archival sources and with analytical insights on the global currents that have shaped the last five centuries, Erika Lee has created a richly textured tapestry enlivened by vivid stories of hundreds of individuals and groups who played significant, though often unsung, roles in the making of Asian America.”
— Sucheng Chan, Professor Emerita of Asian American Studies, University of California, Santa Barbara

“Monumental. . . . Lee handles her scholarly materials with grace, never overwhelming the reader with too many facts or incidents. She tells an American story familiar to anyone who has read Walt Whitman, seeking to capture America in all its diversity and difference, while at the same time pleading for America to realize its democratic potential. . . . Powerful Asian American stories . . . are inspiring, and Lee herself does them justice in a book that is long overdue.”
— LA Times

"A well-written, panoramic view of Asian America from the colonial era to the present that sheds light on how Asian immigrants have sought to make their place in American society and, at the same time, continually changed it."
— Nancy Foner, coauthor of Strangers No More and Distinguished Professor of Sociology, Hunter College and Graduate Center, CUNY

"A sweeping study of the fastest growing group in the United States that underscores the shameful racist regard white Americans have long held for Asian immigrants. A historian of immigration whose ancestors hailed from China, Lee (History/Univ. of Minnesota) delineates the specific history of Asians in America—Chinese, Japanese, Korean, Hmong, and others—while also lending a general sense of what immigrants have endured: discrimination in work, wages, education, and housing, and even incarceration during World War II. . . . A powerful, timely story told with method and dignity."
— Kirkus (starred review)

“Accessibly written for a wide readership, The Making of Asian America opens important, new perspectives on the relationship of the U.S. and the world.”
— Donna Gabaccia, Professor of History, University of Toronto Scarborough

"Pokes holes in the 'model minority' myth by pointing out that Asians in the United States are overrepresented at both ends of the socioeconomic spectrum, and that before World War II, the group was frequently portrayed as being incompatible with American society. An impressive work that details how this diverse population has both swayed and been affected by the United States. Highly recommended for readers interested in this important topic."
— Library Journal (starred review)

"Erika Lee’s new narrative of Asian American history deserves consideration to complement, if not supplant, celebrated earlier syntheses. Incorporating compelling revisionist approaches, Lee peels back several centuries of time to locate the origins of Chinese in America to the founding of the Spanish empire in America in the sixteenth century. . . . She further insists on the mainstreaming of Asian American history in the United States."
— Evelyn Hu-DeHart, Professor of History and American Studies, Brown University

“In her sweeping, powerful new book, Lee considers the rich, complicated, and sometimes invisible histories of Asians in the United States.”
— Huffington Post

“Comprehensive, informative, and engaging. . . . The Making of Asian America is full of fascinating stories about immigrants who left a mark on their adopted country.”
— The Oregonian

"The Making of Asian America chronicles the past and connects it to the present. . . . an important document of history."
— Minneapolis Post

"Racism, as Lee shows, was the unifying factor in the Asian-American experience, bringing together twenty-three distinct immigrant groups, from very different parts of the world. . . . In the eyes of some, Asians in America are, Lee writes, 'perpetual foreigners at worst, or probationary Americans at best.' If Asians sometimes remain silent in the face of racism, and if some seem to work unusually hard in the face of this difficult history, it is not because they want to be part of a 'model minority,' but because they have often had no other choice."
— The New Yorker

“Accessible yet sweeping. . . . Synthesizing many of the exciting discoveries and arguments that have emerged in the field of Asian American history in the past few decades, The Making of Asian America is a must-read for anyone curious about the U.S. and its history.”
— Book Riot

This feature require that you enable JavaScript in your browser.
END_OF_DOCUMENT_TOKEN_TO_BE_REPLACED

This feature require that you enable JavaScript in your browser.
END_OF_DOCUMENT_TOKEN_TO_BE_REPLACED

This feature require that you enable JavaScript in your browser.
END_OF_DOCUMENT_TOKEN_TO_BE_REPLACED

This feature require that you enable JavaScript in your browser.
END_OF_DOCUMENT_TOKEN_TO_BE_REPLACED