The Politics of Persecution: Middle Eastern Christians in an Age of Empire (Hardcover) 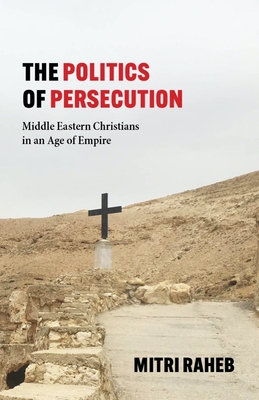 Persecution of Christians in the Middle East has been a recurring theme since the middle of the nineteenth century. The topic has experienced a resurgence in the last few years, especially during the Trump era. Middle Eastern Christians are often portrayed as a homogeneous, helpless group ever at the mercy of their Muslim enemies, a situation that only Western powers can remedy. The Politics of Persecution revisits this narrative with a critical eye.

Mitri Raheb charts the plight of Christians in the Middle East from the invasion of Napoleon Bonaparte in 1799 to the so-called Arab Spring. The book analyzes the diverse socioeconomic and political factors that led to the diminishing role and numbers of Christians in Palestine, Egypt, Syria, Lebanon, and Jordan during the eras of Ottoman, French, and British Empires, through the eras of independence, Pan-Arabism, and Pan-Islamism, and into the current era of American empire. With an incisive expos of the politics that lie behind alleged concerns for these persecuted Christians--and how the concept of persecution has been a tool of public diplomacy and international politics--Raheb reveals that Middle Eastern Christians have been repeatedly sacrificed on the altar of Western national interests. The West has been part of the problem for Middle Eastern Christianity and not part of the solution, from the massacre on Mount Lebanon to the rise of ISIS.

The Politics of Persecution, written by a well-known Palestinian Christian theologian, provides an insider perspective on this contested region. Middle Eastern Christians survived successive empires by developing great elasticity in adjusting to changing contexts; they learned how to survive atrocities and how to resist creatively while maintaining a dynamic identity. In this light, Raheb casts the history of Middle Eastern Christians not so much as one of persecution but as one of resilience.

Dr. Mitri Raheb is founder and President of Dar al-Kalima University in Bethlehem. The most widely published Palestinian theologian to date, Raheb is the author of more than forty books.

This feature require that you enable JavaScript in your browser.
END_OF_DOCUMENT_TOKEN_TO_BE_REPLACED

This feature require that you enable JavaScript in your browser.
END_OF_DOCUMENT_TOKEN_TO_BE_REPLACED

This feature require that you enable JavaScript in your browser.
END_OF_DOCUMENT_TOKEN_TO_BE_REPLACED

This feature require that you enable JavaScript in your browser.
END_OF_DOCUMENT_TOKEN_TO_BE_REPLACED