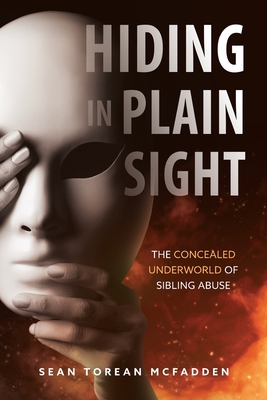 In Hiding in Plain Sight, a U.S. Air Force veteran comes home to a family very different and unrecognizable than the one he left behind more than twenty years ago. He quickly learns that the long-duration battle he's about to fight on the home front will take every ounce of his strength...a battle as formidable and horrifying as one could ever conceive imaginable.

Sean Torean McFadden was a happy boy in childhood and a happy man through much of his adulthood. His departure from home at the age of seventeen led to a rewarding military career that was his greatest success, but upon his return home in his early forties, he would find a different type of enemy than those he worked so hard to suppress in uniform for more than two decades.

This enemy was close, personal, and wore a mask; hidden yet unhidden, known yet unknown, present yet distant. His quest for survival would take him on a long, treacherous and heartbreaking journey in emotional and psychological warfare-where the fight for survival of his mind, his spirit, and the love of one person put him on a divergent, unscrupulous battlefield-one bred in the depths of hell.

All families are imperfect, yet within the expected range of imperfection you may believe that your family is particularly afflicted with a profound dysfunction and that this dysfunction is so severe as to inhibit the happiness and success that every person within that family unit deserves.

Sibling abuse is one of the more controversial areas of domestic violence. Society places great emphasis upon sibling relationships exemplified by the use of terms such as "brotherly and sisterly love" to reflect strong attachments of love and caring, but not all sibling relationships are healthy and well-adjusted. Several studies indicate that sibling abuse occurs in more than sixty percent of families, crossing all racial and socioeconomic lines, making it a common form of domestic violence and an area in need of greater research. For many years, very little research was conducted into the dynamics of sibling abuse, and what researchers do know comes from clinical studies. Parents often ignore it, researchers do not study it in great detail, and many therapists find it a normal element of growing up. However, there is an increasing focus on the fact that, in less than a majority of cases, sibling wars develop into a form of repeated and inescapable abuse.

One study determined that, as siblings grow older, their abuse decreases. The author can personally and unequivocally state that this is not always the case. It is his greatest hope that, should any aspects of his life within these pages sound familiar to you from your own experiences, you will learn from his experiences, be nourished and strengthened by them, and become strong enough to prevail in healing with truth and a greater sense of self.

"False words are not only evil in themselves, but they infect the soul with evil." - Socrates

"Battle not with monsters, lest ye become a monster, and if you gaze for long into an abyss, the abyss gazes also into you." - Friedrich Nietzsche

"The worst of all deceptions is self-deception." - Plato

This feature require that you enable JavaScript in your browser.
END_OF_DOCUMENT_TOKEN_TO_BE_REPLACED

This feature require that you enable JavaScript in your browser.
END_OF_DOCUMENT_TOKEN_TO_BE_REPLACED

This feature require that you enable JavaScript in your browser.
END_OF_DOCUMENT_TOKEN_TO_BE_REPLACED

This feature require that you enable JavaScript in your browser.
END_OF_DOCUMENT_TOKEN_TO_BE_REPLACED