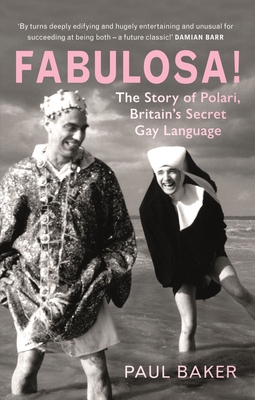 A Times Literary Supplement Book of the Year

“An essential book for anyone who wants to Polari bona!”—Attitude

Polari is a language that was used chiefly by gay men in the first half of the twentieth century. It offered its speakers a degree of public camouflage and a means of identification. Its colorful roots are varied—from Cant to Lingua Franca to dancers’ slang—and in the mid-1960s it was thrust into the limelight by the characters Julian and Sandy, voiced by Hugh Paddick and Kenneth Williams, on the BBC radio show Round the Horne (“Oh hello Mr Horne, how bona to vada your dolly old eek!”). Paul Baker recounts the story of Polari with skill, humor, and tenderness. He traces its historical origins and describes its linguistic nuts and bolts, explores the ways and the environments in which it was spoken, explains the reasons for its decline, and tells of its unlikely reemergence in the twenty-first century.  With a cast of drag queens and sailors, Dilly boys and macho clones, Fabulosa! is an essential document of recent history—a fascinating and fantastically readable account of this funny, filthy, and ingenious language.

Paul Baker is professor of English language at Lancaster University. His books include American and British English and, with Jo Stanley, Hello Sailor!

"Baker intersperses his account with snippets of interviews with Polari speakers, whose firsthand recollections are invariably arresting and funny. He is partial to a spot of innuendo himself, and manages to slip one in every now and then . . . [T]here is some evidence that the language persisted into the 1980s and ’90s in theater circles, and it continues to enjoy a healthy afterlife as a cultural curio—of which this delightful book is just one manifestation."
— Financial Times

"Polari, like some admirably resilient weed, will not die. . . . It is as much for its vocabulary as for its sociological vagaries that we read Baker’s always illuminating book. . . . Fabulosa!"
— Telegraph

"Though a language smacking of Carry On films and saucy seaside postcards, it’s the tragic torment and harassment that gave rise to Polari in the first place that must not be forgotten and which is why this book is important."
— Daily Mail

“Baker’s intriguing and often amusing book is the work of a writer interested in language who has been led by his subject to think about social oppression. . . . [He] writes well about the milieu in which Polari flourished—the theater and the merchant navy. He is especially acute on the political uses of vulgar innuendo. . . . And Baker’s interviews radiate warmth and good humor.”
— Spectator

“Brilliant, readable nonfiction is out there too. . . . For those who want to be in the know, Fabulosa! by Baker is a compelling history of the linguistic lengths to which gay people had to go to hide in plain sight within an aggressively homophobic culture.”
— Observer, "Summer Reading"

“As a fag-hag of some vintage, I enjoyed this illuminating look at Polari—a language used chiefly by gay men in the first half of the twentieth century. There's a fascinating look at its origins, from Cant to lingua franca, and from Italian to Romany; and its usage, from slang spoken by prostitutes to perhaps its most celebrated outing, by characters Julian and Sandy in the classic 1960s radio show Round the Horne.”
— Caroline Sanderson

"[Baker] is especially strong on the changing attitude towards polari within the gay community in the seventies and eighties, and on the important reclamation performed by The Sisters of Perpetual Indulgence. . . . His approach feels fresh, and the personal interludes add to the narrative without being overly intrusive. Fabulosa! is also an excellent primer for would-be polari speakers."
— minor literature[s]

“Baker tells the history of Polari with pride, passion and humor, making clear that camp can be ‘deliciously political.’ Fabulosa! is an important celebration of Polari’s message—which is about laughing at your flaws, creating hope from tragedy, and seeing humor in the face of cruelty and oppression.”
— London Magazine

"Funny and joyous. . . . Fabulosa! is a fascinating and fantastically readable account . . . This is an essential book for anyone who wants to Polari bona!"
— Attitude Magazine

"Baker’s exuberant, richly detailed history of Polari, a 'secret' language used chiefly by gay men in the 1940s and 1950s, is a delightful read."
— Tatler, "Best Books for Late Summer/Autumn 2019"

“The story of Polari—or at least of the world of Polari and the people who spoke it—is gripping. . . . The focus of the language is on body parts and appearances—so that you can discuss the trade at the bar. But it also encompasses other necessities for a night’s entertainment, such as ordering a bevvy.”
— Oldie

“For anyone interested in finding out more about Polari, Fabulosa! provides a thought-provoking, in-depth look at how the language came about and fell in—and out—of favor with the gay community.”
— Press Association Reviews

“Fabulosa! is important, informative, and engaging. A multifaceted foray into the roots, uses, and contexts of Polari is hardly something you see published very day. . . . It makes for informative and entertaining reading.”
— Medium.com

"Highly recommend Fabulosa! . . . A great story about language and subcultures, and about creativity in the face of oppression."
— Michelle Nijhuis

"Many brilliant books have been published in the past half century or so about particular aspects of gay male history. . . . One of the most enjoyable books on the subject this year was Paul Baker’s Fabulosa!, an excavation of the now pretty well lost gay language of Polari, richly evocative and entertaining."
— Guardian

"Baker avoids political sermonizing and instead closes his appreciation of Polari with an expression of gratitude toward past speakers and his recent informants. Endearingly, Baker integrates self-deprecating confessions of his own development from a shy, working-class gay boy with limited prospects to a still shy but extremely prolific professor. He closes the book by acknowledging how the bravery and bravado of Polari-speaking queens have coaxed him out of his shell to be a 'fantabulosa' academic. One thing a drag queen will teach you: you have to be fierce to survive. 'You better work it, girl!'"
— Vernon Rosario

"Typesetters and designers have used what’s called a fleuron for centuries: a small printed flower to denote a division between sections of text. . . . As I read Fabulosa!, Baker’s erudite and witty chronicle of the language Polari . . . my eyes slithered straight past the fleurons at first. They were just wonky flower stems, I thought. But towards the end I suddenly saw the fleuron for what it really is: a teeny tiny moustache. Turning to the back cover to look at the author’s photograph it made me laugh to see that the one used repeatedly in the book is an exact replica of Baker’s own, right down to the length and angle of incline. . . . Add to that the camp, capitalized title with its perky exclamation mark and the picture is complete—text is design."
— Disegno

"For anyone interested in finding out more about Polari—Britain's 'secret gay language'—Fabulosa! Provides a thought-provoking look at how the language came about and fell in and out of favor with the gay community from the days when homosexuality was illegal. . . . Baker details how Polari was based on a mixture of sources, including the common sailors' language of lingua franca and thieves' cant."
— i newspaper

"Fabulosa! is a witty, charming, and informative insight into Polari’s linguistic origins, where and by whom it was used, and how it fell out of fashion post-1967. . . . The level of analysis provided by Baker is incredible given just how little recorded queer history exists in the world."
— The Queerness

"This is the secret language of Polari, spoken almost exclusively by gay men in the United Kingdom during the beginning of the twentieth century. In a fascinating exploration, Baker tells the story of this secret language and its history in his new book, Fabulosa!"
— .Cent Magazine

"A riveting, funny, and joyous insight into the story of Polari, Britain's Secret Gay Language. Polari is the coded vernacular used mainly by gay men in the first half of the twentieth century, often associated with the 1960s BBC radio show Round the Horne starring Kenneth Williams. A fascinating and fantastically readable account of this funny, filthy, and ingenious language."
— Gay's the Word Bookseller Picks of 2019 (Uli's Picks)

"This is a semi-autobiographical journey through the author's life and his exploration of Polari, 'a kind of camp jargon' used primarily by gay men in Britain, as both a linguist and a gay man. . . . The historical overview of the lives of gay men in twentieth-century England—particularly the 1940s–60s—is commendable. Baker offers well drawn sketches of life on board cruise ships, in bars and cabarets, and in dark corners of London to paint a picture of what life was like then for the new generation of the LGBT community. Particularly eyeopening is his discussion of the general public's seeming acceptance of portrayals of 'gay' life as it was presented on certain radio programs. . . . Although Polari was primarily the province of gay men, its story is universal for the entire spectrum of human sexual expression. Recommended."
— Choice

"We become aware of the linguistic lengths to which gay people had to go to hide in plain sight in a culture that was homophobic . Baker writes about the changing attitude towards Polari within the gay community in the seventies and eighties, and on the important reclamation performed by The Sisters of Perpetual Indulgence. This is also a fine primer for would-be Polari speakers. This book has great style. . . . We see here that linguistics are a potent force in social analysis and it brings back the lives of the gay men of the past and preserves the diversity of experiences at an age of hardship and bigotry. Fabulosa! is an important celebration of Polari’s message—which is about laughing at your flaws, creating hope from tragedy, and seeing humor in the face of cruelty and oppression."
— Reviews by Amos Lassen

“By turns deeply edifying and hugely entertaining, and unusual for being both—a future classic!”
— Damian Barr, author of “Maggie & Me: Coming Out and Coming of Age in 1980s Scotland”

“A fascinating and complex story, beautifully told with clarity, passion, and humor.”
— David Crystal, author of “The Cambridge Encyclopedia of the English Language”

“Shot through with his nicely dry wit, this is a fascinating and important study. . . . Yes, Polari might seem a camp relic, but it’s a precious linguistic trace of generations for whom taking refuge in camp was a matter of survival.”
— Patrick Gale, author of “A Place Called Winter”

“Glorious! This fascinating account of Polari, the Lost Language of Queens, is utterly absorbing. It’s history at its best: alive, vivid, fluid, warm, human, and humane, and it gets as close as any book I've read to penetrating the mystery-wrapped-in-an-enigma that is camp. Not just fabulous. Not just fabulosa. But completely fan-tab-u-losa!”
— Neil McKenna, author of “Fanny and Stella”

"Baker considers the complicated roots of Polari as it combines slangs such as Cant, a thieves’ language, and Parlyaree, a showman’s, into the overall language of show people, actors, dancers, and gays. He comes up with a rather lovely definition of it as ‘a linguistic form of drag.’ . . . Five stars.”
— Fortean Times

This feature require that you enable JavaScript in your browser.
END_OF_DOCUMENT_TOKEN_TO_BE_REPLACED

This feature require that you enable JavaScript in your browser.
END_OF_DOCUMENT_TOKEN_TO_BE_REPLACED

This feature require that you enable JavaScript in your browser.
END_OF_DOCUMENT_TOKEN_TO_BE_REPLACED

This feature require that you enable JavaScript in your browser.
END_OF_DOCUMENT_TOKEN_TO_BE_REPLACED