Grace: President Obama and Ten Days in the Battle for America (MP3 CD) 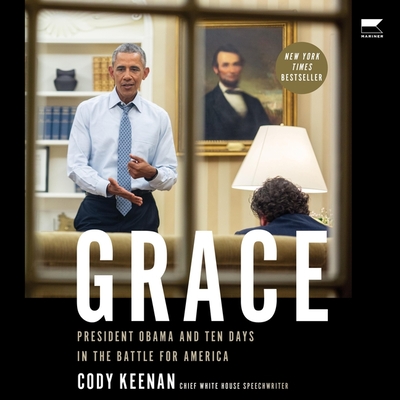 From Barack Obama's chief speechwriter Cody Keenan, a spellbinding account of the ten most dramatic days of the presidency, when a hate-fueled massacre and looming Supreme Court decisions put the character of our country on the line, and a president's words could bring the nation together or tear it apart.

A white supremacist shooting and an astonishing act of forgiveness. A national reckoning with race and the Confederate flag. The fate of marriage equality and the Affordable Care Act. GRACE is the propulsive story of ten days in June 2015, when Obama and his chief speechwriter Cody Keenan composed a series of high-stakes speeches to meet a succession of stunning developments.

Through behind-the-scenes moments--from Obama's suggestion that Keenan pour a drink, listen to some Miles Davis, and find the silences, to the president's late-night writing sessions in the First Family's residence--Keenan takes us inside the craft of speechwriting at the highest level for the most demanding of bosses, the relentlessly poetic and perfectionist Barack Obama. GRACE also delivers a fascinating portrait of White House insiders like Ben Rhodes, Valerie Jarrett, Jen Psaki, and the speechwriting team responsible for pulling it all off during a furious, historic stretch of the Obama presidency--including a gifted fact-checker who took Keenan's rhetoric to task before taking his hand in marriage. GRACE is the most intimate writing that exists on the rhetorical tightrope our first Black president had to walk, culminating with an unforgettable high point: Obama stunning everybody by taking a deep breath and leading the country in a chorus of Amazing Grace.

This feature require that you enable JavaScript in your browser.
END_OF_DOCUMENT_TOKEN_TO_BE_REPLACED

This feature require that you enable JavaScript in your browser.
END_OF_DOCUMENT_TOKEN_TO_BE_REPLACED

This feature require that you enable JavaScript in your browser.
END_OF_DOCUMENT_TOKEN_TO_BE_REPLACED

This feature require that you enable JavaScript in your browser.
END_OF_DOCUMENT_TOKEN_TO_BE_REPLACED